I was looking for a good book that made a good case for the theistic beliefs without being preachy. That is, a book that introduced me to the arguments upon which the world religions build their theologies. The three world religions I speak of are the Abrahamic religions. Abraham, a prophet recognized by the world religions, is considered the first man to have had the honor of being spoken to directly by God. The oldest manuscripts to recognize Abraham’s status and record the encounter can be found in the Bible, or, as the Christians call it, the Old Testament. As such, the Jewish theology seemed to be the most reasonable source to contain the foundations I was looking forward to studying. This is one of the books suggested. 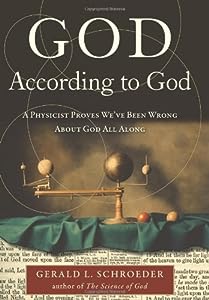 Gerald Schroeder‘s book is subtitled “A Physicist Proves We’ve Been Wrong About God All Along.” I get it, he has a degree in physics. What has that to do with anything? Is that not an attempt at appealing to authority? Should we trust his views, before even reading a single line, just because he has a degree in physics? Or does that show that he knows what he’s talking about any better?

God According to God is well written. The author is clearly not only a good writer, but he’s also well-versed in all the topics he touches upon. Schroeder frequently admits the obvious counter-argument to the points he makes. In chapter 3 “The Unlikely Planet Earth,” where, using Drake’s equation, he calculates the number of Earth-like planets in the visible universe. At the end of the chapter he concludes by saying:

To be honest, at this point I had already read 3 chapters and was a bit surprised that his conclusion wasn’t that Earth was by far the only possible host of life. Part of the reason for this expectation is his obvious bias to demonstrate how unique and rare life on Earth is. Although his assumptions are a bit conservative (for example he doesn’t consider the possibility of life on moons orbiting large planet, such as Titan,) his conclusion is spot on. For what it’s worth, I thought he wasted a good bunch of papers in this chapter, as the conclusion, if anything, convinced me that Earth is just a fluke, with a possible 10,000 more sprinkled around. What is so special about that escapes me.

The book can be divided into two logical domains: Physics and Theology, but of course they don’t share an equal number of pages. The division is so stark, that one might think the respective chapters were written by completely different authors. As a matter of fact, there are contradictions between them. In chapter 2 “The Origins of Life” he writes:

Our cosmic genesis began billions of years ago in our perspective of time, first as beams of energy, then as the heavier elements fashioned within stars and supernovae from the primordial hydrogen and helium, next as stardust remnants expelled in the bursts of supernovae, and finally reaching home as rocks and water and a few simple molecules that became alive on the once molten earth.

In the Garden of Eden, 2,448 years prior to this revelation at Sinai, Adam and Eve were confronted with the identical options.

This caused me so much cognitive dissonance that I went back to find the section where the cosmic origin, what he calls the “Big Bang Creation,” is described. This physicist apparently holds the belief that our planet has billions of years behind it, yet he maintains that Adam and Eve were in the Garden of Eden exactly 2,448 years before the revelation at Sinai! Considering the era when the Garden of Eden encounters supposedly occurred and the lack of numbers in any biblical or other sources, the above number is extremely precise. Not only that goes unexplained, Schroeder assumes the reader has already agreed to the Garden of Eden events as told in the Bible. In fact, that is my main point here: The author assumes the reader is a believer and well-acquainted to the theology and he’s basically giving scientific backing and, as is apparent in later chapters, throwing his own interpretation and understanding of the nature of God.

Perhaps the title might have given a clue or two as to the conviction of the author regarding his understanding of God’s nature and plan. There is perhaps less color hues in a rainbow than different interpretations and explanations of God’s nature, plan and instructions to the human race. The author of God According to God adds yet another, and it’s not a conventional one, at least it isn’t to me.

In chapter 6 “Arguing with God”:

The sequence of events at and following the binding give compelling force to the supposition that the God of the Bible not only wants a dialogue with us humans, but even more than that. God expects such, and if the situation seems unjust or unjustified, then, beyond a dialogue, God wants us to argue. If our case is strong enough, God will even “give in,” or at least modify the Divine directive. Moses seems to have understood this trait of the Divine.

A few pages down:

Argument seems to be the standard and the expected biblical operating procedure in our encounters with the Divine. The surprise is that, having designed and created our universe with all its magnificence and granted us the freedom of choice, God wants us, expects us, to interact with the Divine about how to run the universe.

In the next chapter “In Defense of God”:

As I read the events of the Bible, in human terms I see God in a sort of emotional bind. God desperately wants us to choose life, a dynamic, purposeful existence, but doesn’t want to force us along that line. Hence we are granted the liberating tzimtzum of creation. God has to hold back and let us try. When we really mess up, God steps in. It’s so human. Mom teaches junior to play chess. Looking over his shoulder as her son makes his moves on the board, she sees a trap developing. He is about to lose his queen. If she wants her kid to learn to think ahead, to envision the distant outcome of the initial move before that move is made, she will do well to keep her hands in her pockets and let him make the error or at most give a few very general suggestions, as God through the Bible gives to us. It’s frustrating, even painful, but it is part of the learning process, Divine as well as human.

The above quotes are not the only cases that made me stop reading, and pause… for a while. It might have been that I had expected the run of the mill explanations and arguments. Instead, I found radically new concepts. Ideas I hadn’t encountered before. I can see that some of these ideas could be called heretical. If we make a strong case arguing with God, “God will even “give in,”” and “[…] God wants us, expects us, to interact with the Divine about how to run the universe.” And apparently, there is a “Divine as well as human” learning process!

Whatever your stance on God and religion, God According to God isn’t a rehash of age-old arguments. Nor is it the typical “science proves the existence of God” kind of book. Gerald Schroeder is very well read on ancient Jewish texts. His Hebrew skills are of the translator caliber. His science is, as far as I can tell, solid. Overall, I learned quite a bit from the historical writings and the ancient Jewish theology that is blended in with the science and God’s strive to learn as we go. It’s just that I didn’t get what I paid for.