Jerry A. Coyne does a brilliant job in Why Evolution Is True. This is certainly one of the very best books on the evidence for evolution. Perhaps it’s only counterpart is Dawkins’ The Greatest Show on Earth. 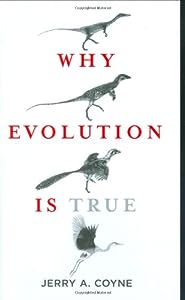 Cover of Why Evolution Is True

Coyne takes the reader step by step from the hypothesis to testability to evidence in clear and concise progression. The book covers historic, geologic, molecular and fossil evidence, to name but a few. It’s full of interesting stories and factoids. Oddities that can hardly be explained without evolutionary theory is one of my favorite themes in the book.

For a topic this broad and complex, the author did a brilliant job in presenting the material in a half-digested form, ready for consumption by virtually anyone with little background. The book never gets boring. This is a page turner to recommend to anyone who wants to get familiarized with evolutionary biology being entertaining.

Dawkins takes the topic of evidence for evolution head on in The Greatest Show on Earth. The book starts off by explaining that fossils are not even necessary to demonstrate the validity of biological evolution. Dawkins likens this to a murderer to flees the sentence even when all the evidence mount to definitive incrimination because of new video evidence, that while supporting all previous evidences, contains a gap and is put in the shadows of doubt by the lawyer in defense of the accused. The gap in the evidence video is very similar to the gap in the fossil record.

The book explores all the different hypotheses and expectation that follow from the hypothesis put forward by Darwin over 150 years ago. In deed, Darwin himself did state how his hypothesis could easily be discredit, if certain easily verifiable conditions turned out to be true. One such condition is the order of the fossils in the different strata or layer of earth. So while there is no expectation for the fossil record to be complete, a single misplaced bone would easily turn the whole biological evolution theory on its head.

Dawkins discusses the evidence from molecular biology and genetics as well as many other sciences. He explains how a seemingly complex organ or biological feature may have come to evolve while serving a functional purpose along its different stages.

There are many things to like about this book, not least the mountain of facts and tidbits that the author enriched the book by. However what I personally like about the book is how it explains that the concept of species is man-made. It’s a labeling system that has no counterpart in nature. In fact, he goes on to explain that each generation is a unique stage in the evolutionary history. We only get to group them when a specific group have significantly drifted from another closely related group. Where significant drift is typically defined to mean the two groups can no longer interbreed.

Overall, The Greatest Show on Earth and Jerry A. Coyne‘s Why Evolution Is True are my two most favorite evolutionary biology books, yet.