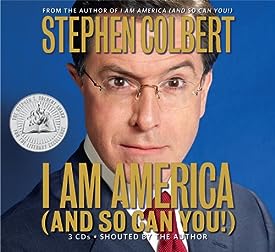 Cover of I Am America (And So Can You!)

Satire and sarcasm are two tools Stephen Colbert can’t stop using to give his otherwise very funny and sometimes hysterical skits some serious meat and subject. And I can’t seem to get enough of it.

I Am America is a brilliant exercise in looking at the world upside down. The topics are contemporary and hotly debated in the public arena. Cobert’s take is narcissistic, self-centered, indifferent, proud and downright obnoxious. At least, that’s the character he pretends to be. A very ignorant yet opinionated pundit of the most annoying type. Indeed, if it weren’t for his humor and sarcasm, non of it would fly.

Colbert sometimes downplays his words so much so that you may miss them if you’re not too careful. Like the homosexuals who want to have their rainbow colors everywhere, even on white flags. Very subtle, if you caught the drift. (Hint: white-light through a prism.)

I’ve had quite a few laughs listening to the audio book version of I Am America. On a few occasions I even caught the attention of others seeing me seemingly bursting into laughter for no apparent reason, except for a pair of ear-buds, that is.

Perhaps of the more memorable pieces are those on old people, family, religion and homosexuals. The part about pets didn’t resonate with me, but then again, I don’t have a pet. However, his wise words about his one issue with children, that he doesn’t like them, and his “rationale” were really sidesplitting. There was a cast who performed small skits at the end of each chapter which I was afraid would turn out to be dull, but on the contrary it wasn’t. They did a good job picking the right voices and actors. Apparently, Martin Luther King was worried that after he wins his cause, he’d find the pastorate leaving him wanting. To make up for it, he was available for hire to lead marches and protests. This was presented by a voice almost identical to King’s own, yet, the actor mentioned that he walked next to King (among others.) So while you shouldn’t think it’s King speaking, your brain can’t help but take the voice to be his. Amusing trickery.

My only issue with this book is that the last one-third seemed more dry and somewhat serious than the rest. I found that a bit confusing, as the whole point of the character he’s playing is the satire and sarcasm. Once that waned, I found myself taking his words seriously and that’s dangerous when you know you’re listening to satire. I had to snap myself out of it a few times, to make sure I don’t take anything as fact when he’s clearly making stuff up as he goes. Like the “fact” that bathroom tiles are the cause of 80% of domestic fatalities. It may very well be true, but, it probably isn’t.

I enjoyed this book quite a bit and found it very up-lifting. I’m just dumbfound for not recognizing Jon Stewart‘s voice in the audiobook.