The Physics of Star Trek is Lawrence Krauss‘ best known book. In this book an otherwise witty physicist analysis the most outlandish of the Star Trek technology and science. 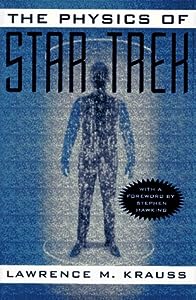 Cover of The Physics of Star Trek

The book’s idea is simple, the topic no so much. Krauss does a very good job in trying to layout the logistics, physics and the practicality (or often lack-thereof) of anti-matter engine, teleportation and beyond light-speed travel. Before reading this book I didn’t think the author was serious in studying the physics of Start Trek. To my delight, I was wrong.

Lawrence krauss does a very good job of dissecting and cutting out fiction from science. He’s witty, fun and very insightful in his analysis. The book is not at all dry. It’s full of scenes from the movies and anecdotes. Overall a fun read that really pushed things to the edge. This book really encouraged me to continue and finish Physics of the Impossible by Michio Kaku, which has a very similar theme.

It’s quite clear from the book that Lawrence Krauss enjoys Star Trek as much as he enjoys physics. That is to say, he enjoys both thoroughly. A short and fine read that’s as adventurous as Star Trek can get. And at that physics as well.